Things They Have Told Me – Greenman of Crosslands

Many of you know that my favorite nature spirits are the Greenmen, the Hooded Wood Elves and the Gnomes…They are often the first folks I meet in a new location. Well, it took a little while for me to see a Greenman at my new home in Kennett Square, PA. But the other day I was out walking (with camera, of course) and a very kind Greenman introduced himself. 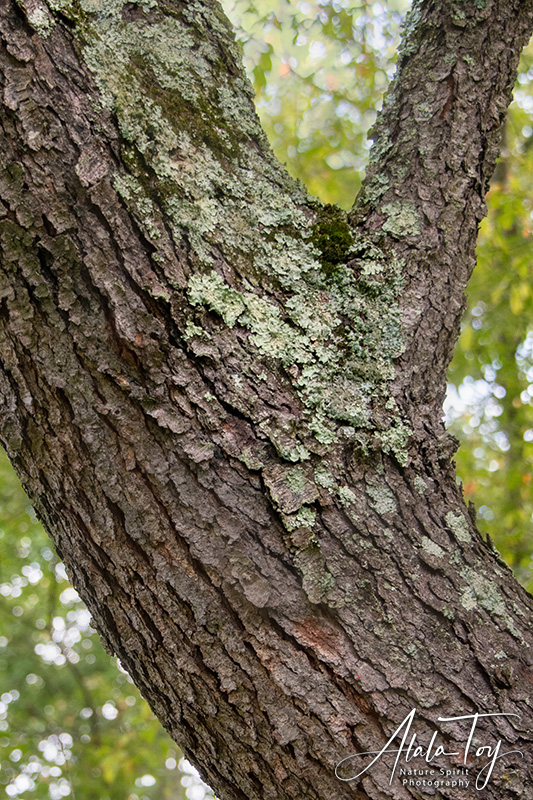 So…the Greenmen are the philosophers, warriors, wisdom keepers of the nature spirit domains. They enjoy explaining their work to me, and I do my best to understand and record. After 80 wonderful years on earth, spent seeking to fathom and communicate with the nature realm, I’ve acquired some knowledge of different disciplines including dowsing, land energy work, human energy work, gardening, and inter-dimensional communications. Understanding these different knowledges is very helpful when you are seeking to extend your knowledge into yet another concept, such as here.

This Greenman is one with triangular features. As with humans, this type of head structure indicates someone interested in the philosophical and the esoteric. He has two views of his face and eyes – larger and smaller. The two sets of eyes are looking in different directions.

This is a classic Celtic-style art piece of a Greenman in the triangular style. (Note: Available from Wayfair, not from us). 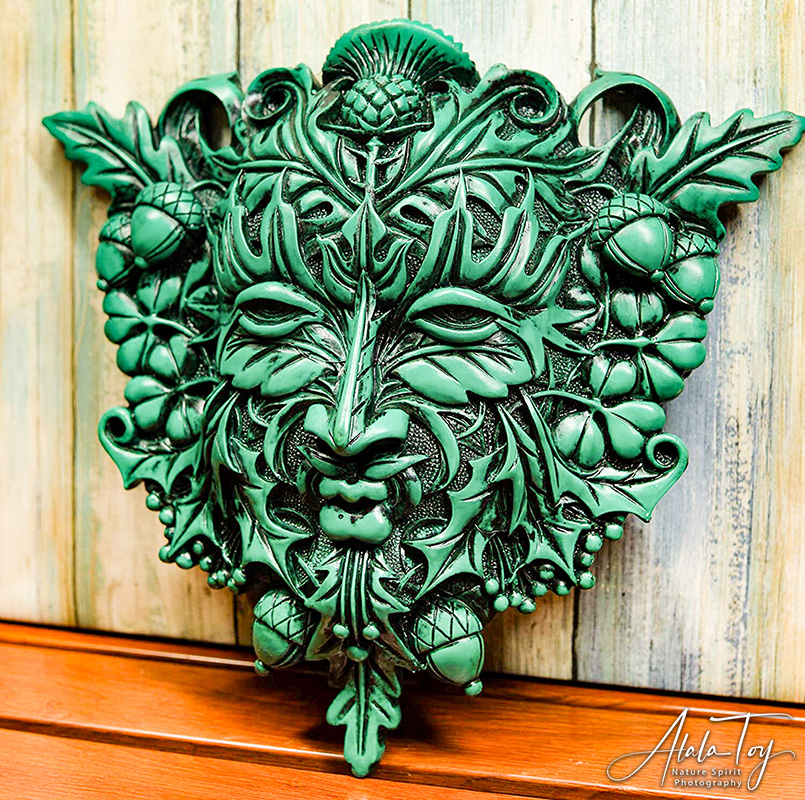 To the right is a typical Celtic Triangular Greenman plaque, for you to see the similarities.

John (as he asked to be called, in English) has a very well thought out sector under his guardianship. Here are some photos he worked with me to acquire, to show you his work. He works with a Council made up of many other nature spirit life forms who have many different ways of perceiving and acting. Many of these beings are also depicted in the Greenman’s Council Tree. They include some of the energies one would expect to find – wood elves, intellectuals, warriors, graceful women, dark forces, the base level of common folk who do the everyday labors in every world…

Here are three areas of the Council Tree that have images (there are other images as well as these). 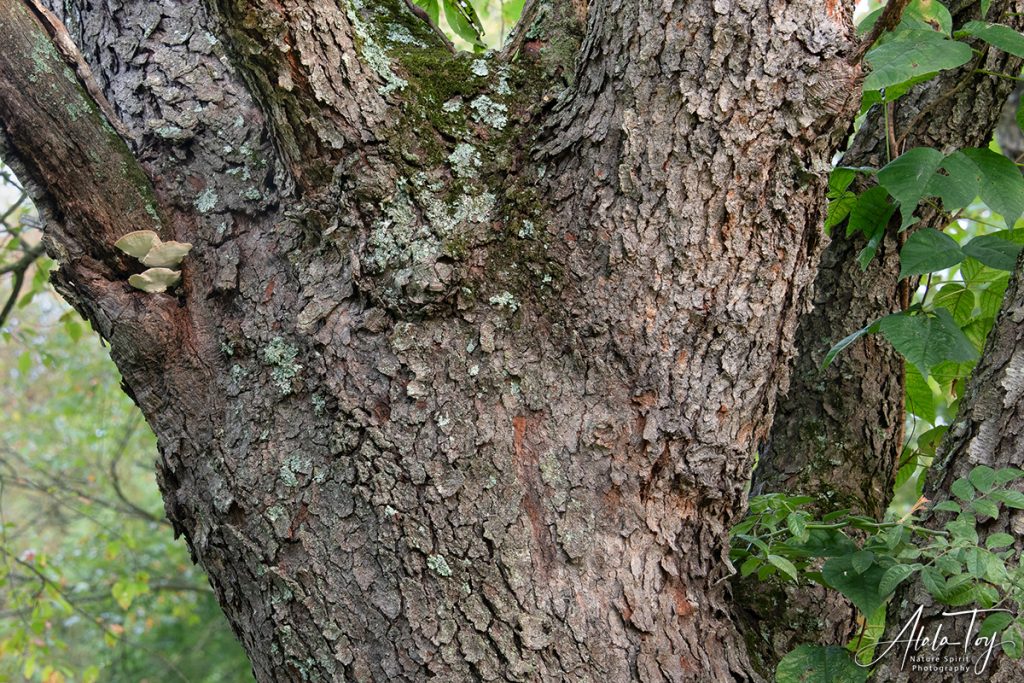 Right – up high on the front are these folks, who include a strong attractive woman (near the fork in the tree). Below her slightly to visual right is a hooded wood elf with pointed chin (much like the Greenman). On the right branch, up higher, is a small elf with a curled handlebar mustache – favored by quite a few of the nature spirits for live in these particular woods. 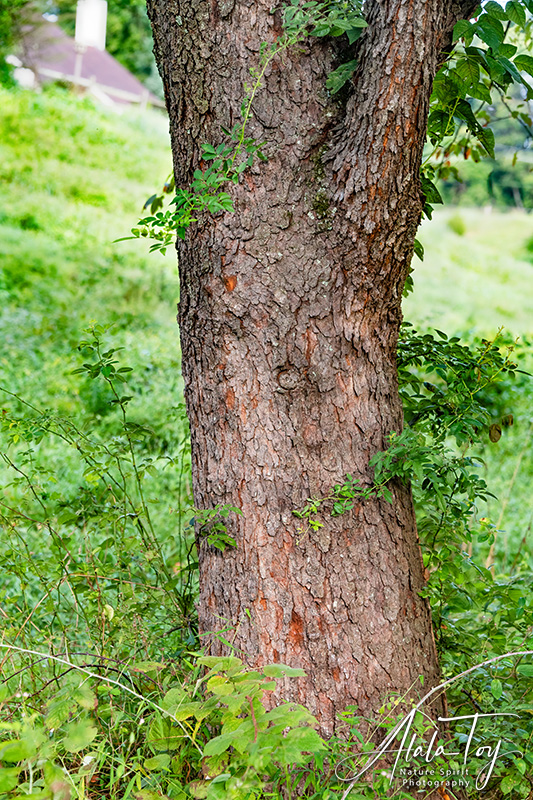 Left – down at the human-viewing level there is a comfortable, friendly, easy-going nature spirit with whom hikers through the area would feel comfortable. But as with many such life forms, there is an underlying sternness and wisdom as seen in the life form who occupies that larger being’s third eye and sports a chevron mustache. But above all is a wise and cheerful owl.

I’ve blurred out the Greenman and everything else but the three nature spirits who are part of the Greenman’s Council. Two hooded and horned wood elves on the left (the top one with the twirled mustache many spirits here like to sport); an extremely grounded, “ordinary” energy spirit on the right, who deals with all who do not understand.

Right – back to our Greenman who actually has a number of Council leaders standing behind him, for consultation and to provide their wise knowledge of their particular beings. They are harder to see so I seriously blurred out all else.

The humans who have helped shape the woodland use, over the years, seem to have intuitively grasped the nature of John’s work as they carved out, in this area, an eye-shaped oval containing what humans call negative energies or vortexes. You can spot such an area by the number of contorted trees that are present. Sometimes there are lines of trees all bent at similar angles, denoting lines of energy passing through. Energy land workers understand such areas to be negative vortexes, very useful for a community when no homes are built on the vortex itself, for such places siphon off negative energies, thoughts and feelings of the area. A very useful place to stand i 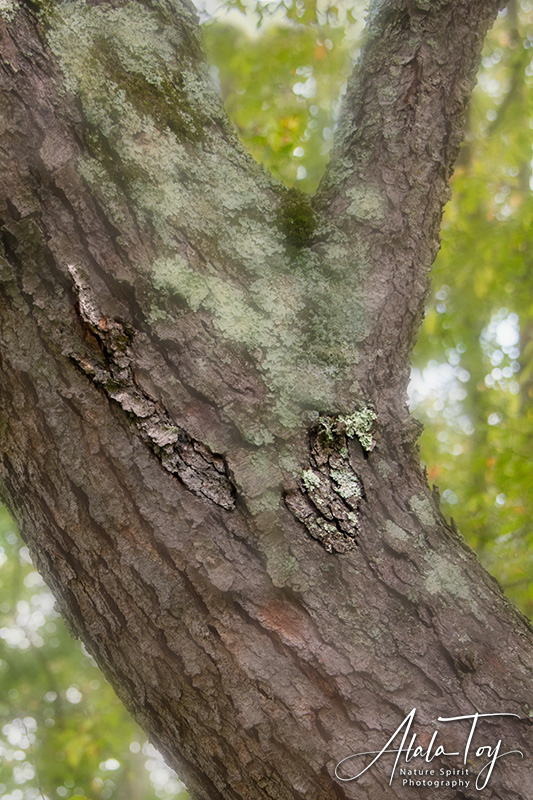 n if you have negative feelings you want to release from yourself – the land eagerly pulls these energies into itself as its food, keeping the vortex clean and active.

Panorama of the two vortexes

Next to such an area one often finds a positive vortex. Because once the negative is pulled out, you would want to fill yourself with positive energy. A positive energy vortex spins up and out, and is frequently sunny and bright. There is a close proximity between the two energy forms, one siphoning off and the other pouring in. Both areas need to be kept clear, in their own way, for the symbiotic relationship to continue. The Greenman and his Council work on this.

John and his Council have placed their calling cards, and currently use as their base, a tree at the border between these two vortexes. In the panoramic photo, you can see the dark vortex on the left and the positive vortex on the right. The Council Tree is to the far left. This is a mobile position and should something happen to that particular tree – they would simply move their base somewhere else.

Greenman in the Trees 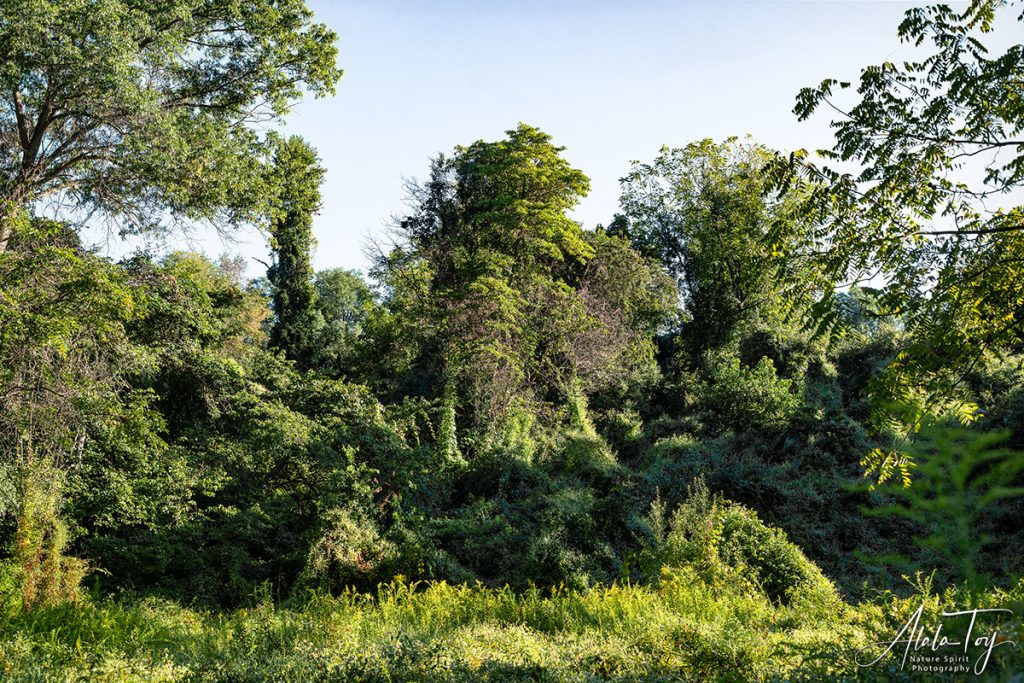 John was very pleased that he had fashioned a portrait of himself in the foliage at the back side of the positive vortex. You can see him quite clearly here – his pointed chin, extended hair, and his staff on the far left of the photo.

When John guided me to see his artwork, and photograph the living sculpture, he guided me along the path to a prime viewing spot where all aspects of the forest sculpture could be seen. What I find very interesting is that there is a natural circular “balcony” carved by nature into the long grass all around it. This is not human made – it is fashioned from natural materials as nature spirits would sculpt.