Do Trees Fall in Love? 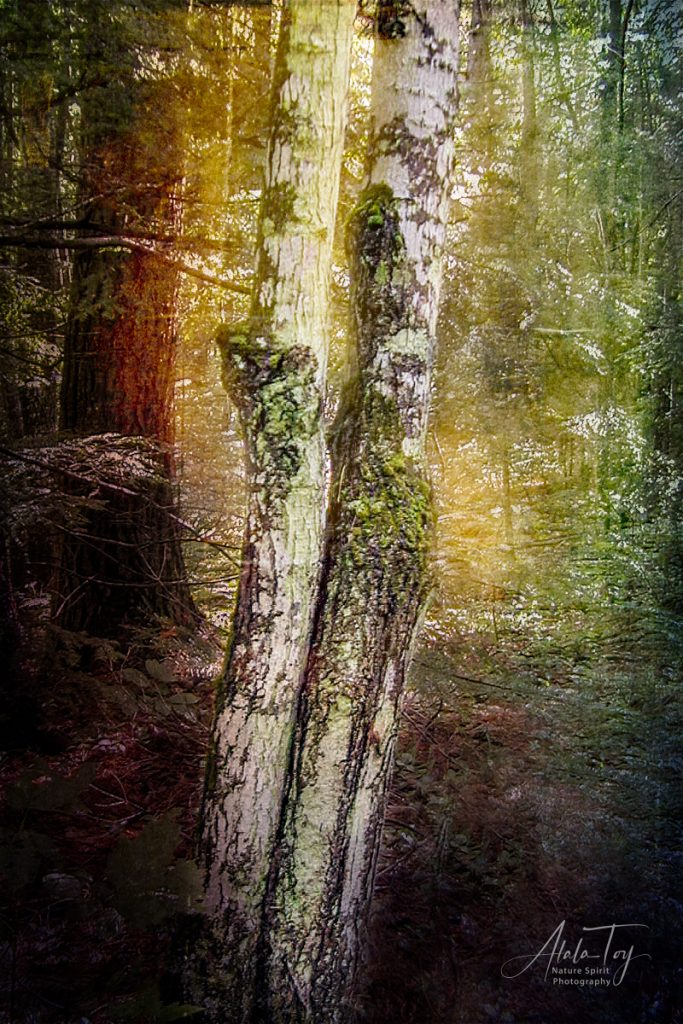 Do trees fall in love? The short answer is – Yes. And they also flirt and dislike…and other of the universal emotions. Here are photo stories from a forest outing I took with a Deva, many years ago.

I was just starting out on my nature spirit photographic journey. In this situation – I was fortunate to attract the attention of a forest Deva. She took the time to show me a grand experiment she was undertaking. This was like the president of a company showing kindness towards a neophyte young reporter.

Devas are high-level nature spirits who oversee an entire area of nature. To the left is her signature tree (an antenna from where she oversees the energetic net she has spread throughout her domain). Her profile is in the tree on the right. A large snake (the kundalini energy of the experiment) is in his signature tree on the left. 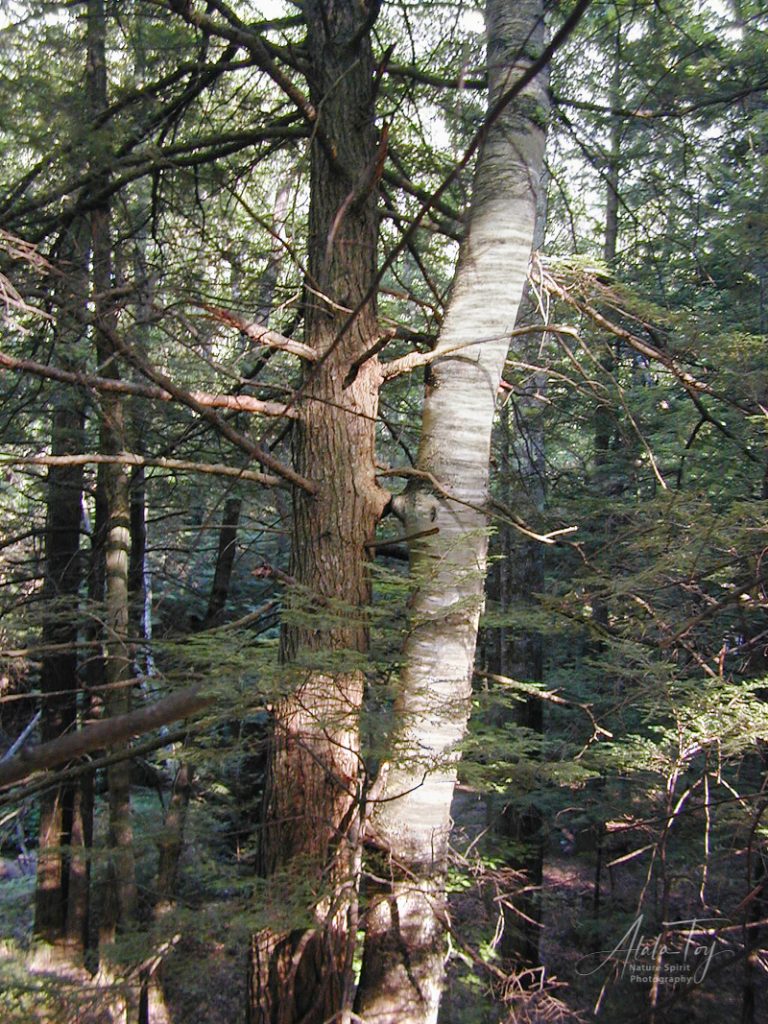 This story began as I was walking in the national forest that abuts my family’s land in New Hampshire – both are protected forests. I was enjoying experimenting with my new point-and-shoot camera.

I heard two voices calling out to each other “I love you” – almost human – and went searching for what this could be. I came upon a Balsam calling out to his beloved, a Birch tree who was dying.

I wrote about this experience in my blog The Balsam and the Birch | A Love Story and how I tracked their story over the years.

My connecting in to these two lovers at their emotional life transition also connected me to the Deva, who tending to two of her favorite residents at this sad time.

I believe this emotional crux point is what drew the two of us together in sympathetic frequencies. The Deva lovingly explained the love story of the Balsam and the Birch and how they were her stars in an experiment she was conducting. If I would return the next day, she said, she would explain the experiment to me.

What the Deva Showed Me

The next day, as soon as I entered her territory, the Deva began what was, looking back, an amazing experience for me – although while it was occurring, it seemed totally normal and ordinary, almost like being taken on a tour of a scientific laboratory.

The Deva explained that in her area she was, over many years in human time, pairing stern strong Balsams with the kind and gentle not as strong White Paper Birches. She believed this combination would bring gentleness to the Balsams and support for the Birch who suffer during the bitterly cold Northern New Hampshire weather. (See how the Balsam has spread out his roots to protect his beloved Birch, right) 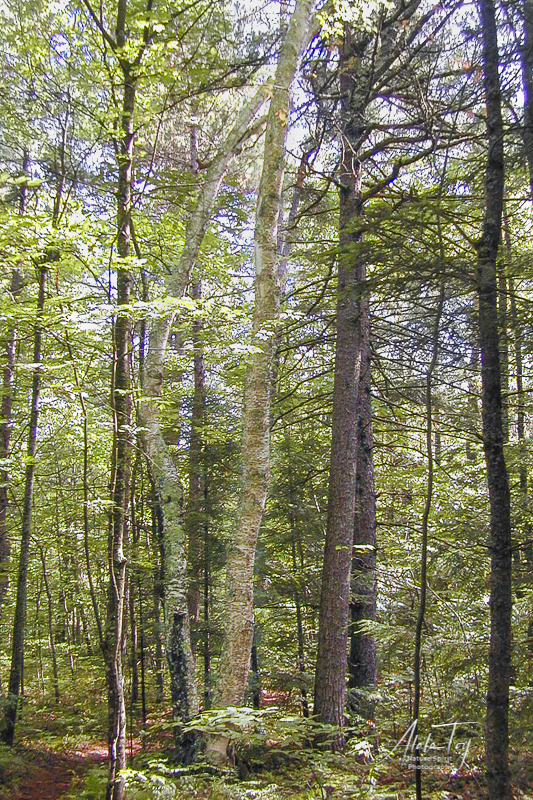 She led me around her realm and described various of the pairings. We tramped about quite a bit, as the pairings were spread out at different locations.

The Deva explained that she paired a number of Balsams and Birches but that none were as successful as the pair I first came upon.

The Deva did her best to pair compatible energies, but it was up to each pair as to how they would work together in this pairing. Some pairings did not work out as well. 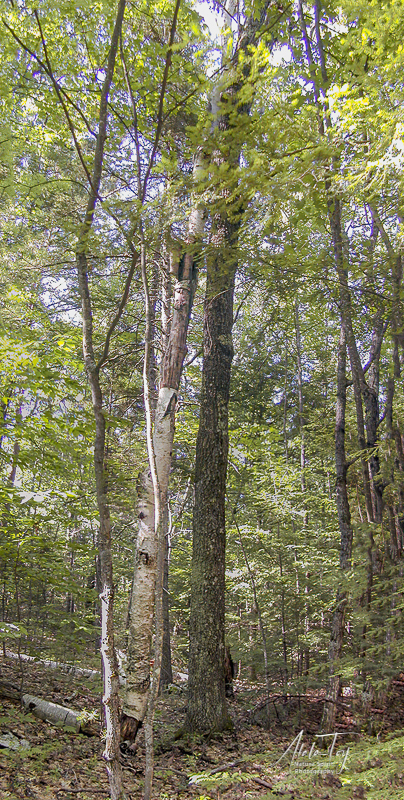 This white birch (center in the group photo shown on the left) is a sociable flirt. She is clearly the star of the show and is holding court. You can see two admiring Balsam suitors to the right. Next to the star is her sidekick, a Birch whose life energy is not as strong and who, as she has grown, inclines towards the star. In this situation, the Deva explained, the pairing for strength during the hard New England winters has not occurred. 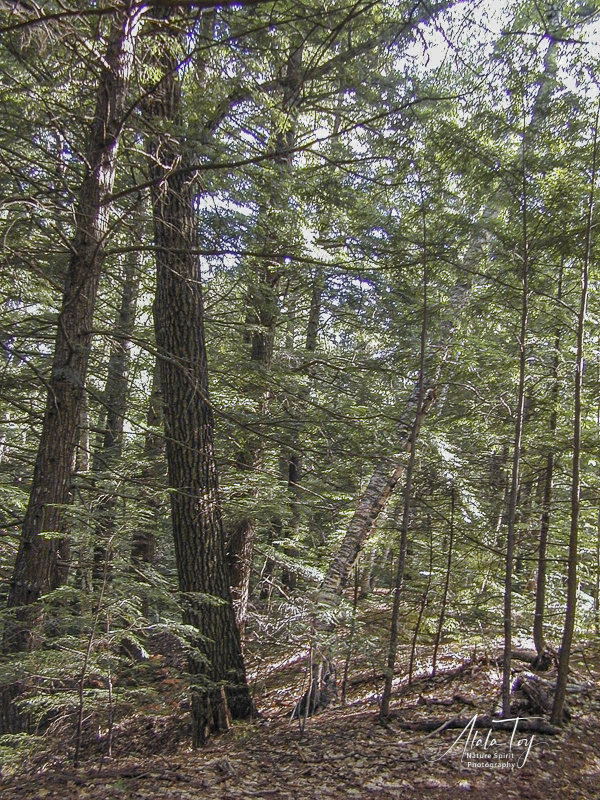 Here are two pairings that did not succeed at all.

To the right you see a Balsam and a Birch who are politely keeping their distance.

To the left you see a Birch and a Balsam each of whom definitely did not want to hang out together. Each has pulled dramatically away from the other. 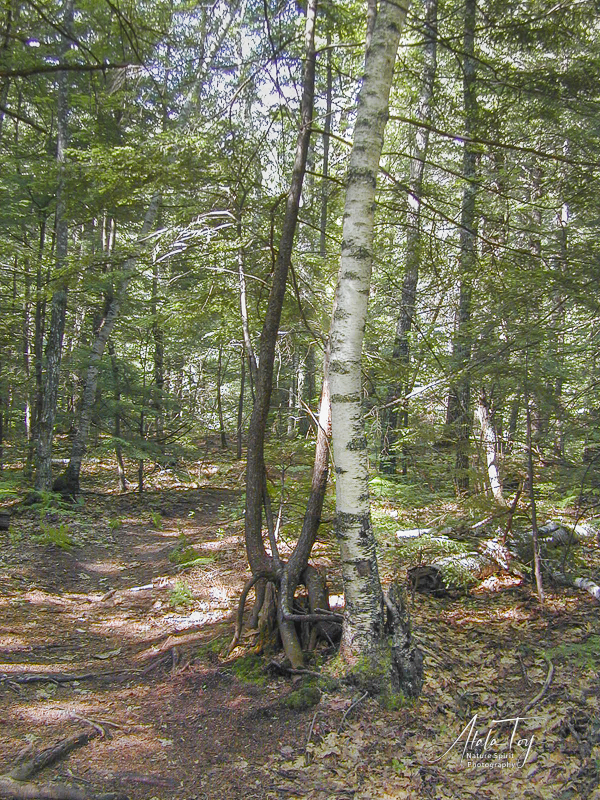 You see, the deva explained, the original Balsam died, leaving a weakened Birch who sought to support the energy of the Balsam. That support resulted in the Balsam attempting to carry on by generating new life from its roots. However, two offshoots resulted and over time created a self-absorbe relationship – they intertwined between themselves, were totally self-absorbed in their relationship, and rejected any connection with the “old lady” birch. Her energy is weak, and theirs is contorted. You can see how the birch has attempted to pull away.

This situation is the polar opposite of that shown in The Kiss, where the Balsam for many years after clung to the memory of his true love.

Yes – Trees Do Fall in Love!

So – these are some of the stories the Deva showed me. The photos are from when I first began my project and it was a bright sunny day, so I apologize that the photos are not the best quality. But it was such an honor for a neophyte reporter to be shown around by a Deva that I just had to share anyway.

I have looked about in the Devic territories surrounding this one and have not found other such experiments, although I am sure they must exist here and there.

This story is in response to a question posed by a member of my closed Facebook group Nature Spirits Around the World. It answers the question – Do trees fall in love?