Here’s a photo I often refer folks to who are interested in obs. It contains the entire repertoire of phenomena of what can occur in such a photo. 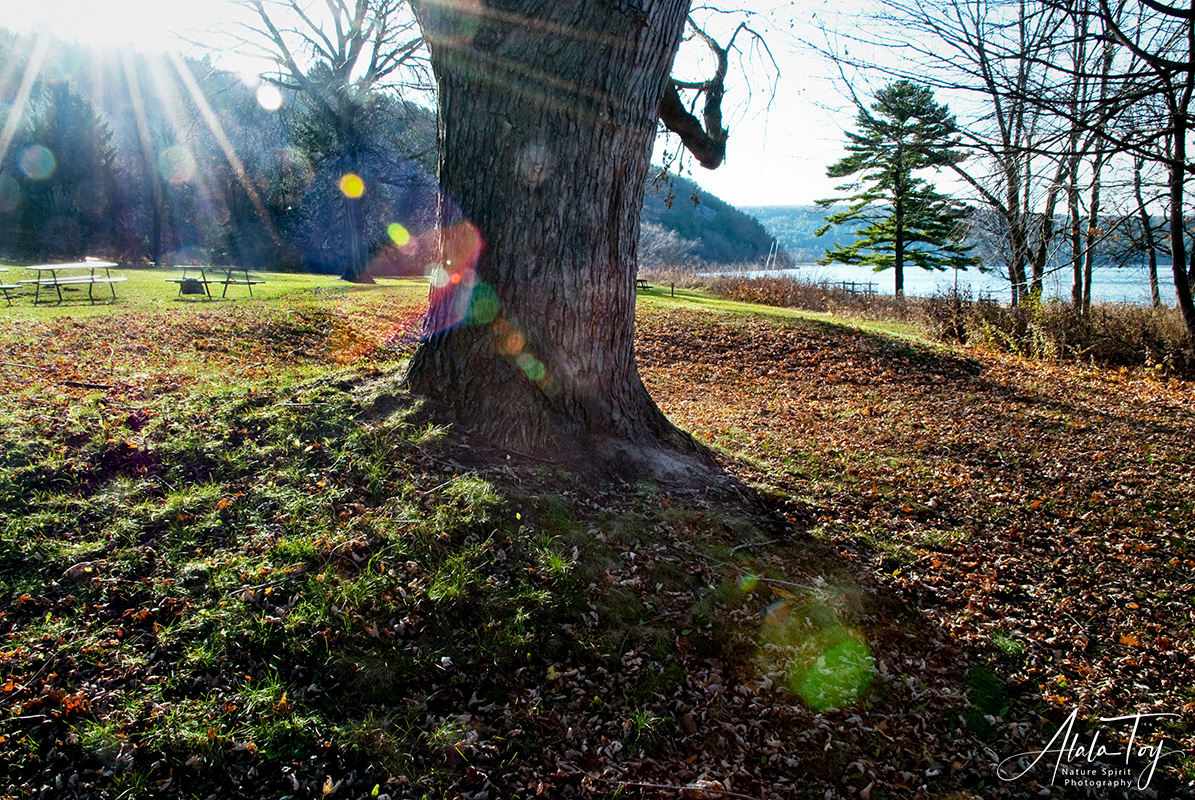 I took this photo at Bear Mound in Devil’s Lake State Park, Baraboo, Wisconsin. It contains light flares, dust specks, orbs, and a spirit revealed in the altered light all these phenomena created for the camera. Let’s look at it.

The State Park protects a number of effigy mounds. Mounds are often difficult to see from the ground, but are often clear to see from the air especially in winter and in a light snow. There are a lot of energies in the park, from spirit to people having fun.

You can see some of the mounds in the map below. The bear mound in my photo is located lower right, near the railroad tracks. Photo courtesy of the Bear Mound website. The park was established in the late 1800s and respect for the ancient mounds was sometimes less than favorable. In the area, where there are other mounds, farmers often destroyed them for crop use. Here the mounds were preserved. But at this location, a large tree has been allowed to remain in the middle of the 50 foot long bear effigy and picnic tables and a grill have been placed along the bear’s back. In this photo, you are looking towards the head of the bear, which is behind the tree.

Experts are still seeking to understand the society of the mound builders and many theories have been put forth. But here we are looking at an energetic situation that camera has recorded.

The light was shining very bright on this late summer day and I was intentionally seeking to intensify the light flare that my Nikon D7100 could produce at certain angles. The flares would end in a green burst which I found attractive. So that long line of colors comes from light hitting the computer sensors of the camera. It is not spirit. You may well experience similar situations with your camera. If you do, keep experimenting and learn to discern a light flare from a spirit manifestation

Another phenomena in this photo are the beautiful dust rainbows. These are the white round dots upper left. These are not orbs. Dust rainbows and camera lens smudges can look like forms and I frequently get photos sent in by newbies who are excited to have photographed an orb. When you are doing this work – make sure you have a clean lens. Also, note if the “orb” has hexagonal line circling it – these come from the photo capturing the opening of the camera lens – or the “orb” is oval – this comes from the curvature of the lens itself.

For example, you can look at my photo Go Fetch in which some large HooDoos seem to be tossing a pink love ball between themselves. This is a spot of red dust the blew onto my lens on a windy day at Bryce Canyon.

If you want to prove you have photographed a real orb – look for a geometric form or a complex color spectrum or an actual form inside the light circle. For example, you can look at my photo of The Buddha Orb to see an authentic orb with a figure inside.

This photo did capture some interesting phenomena and let’s look at those and how they happened.

Cameras are life forms capable of evolving just like everything else in creation. They adapt to the intent of their partner (the photographer) and over time this symbiotic relationship affects the result. My interest is in recording nature spirit phenomena and I was at the Park exploring this topic. So while I was focused on creating a lovely rainbow of color, the camera was picking up what else was present at the scene just out of my visual range.

I could sense the presence of spirits, but I could not see them. I get photos sent to me where folks tell me they felt the presence of spirit and look what they got. They show me all these false but artistic phenomena above. And sometimes very very blurry photos they have grossly enlarged and find a pareidolia phenomena of something looking like a form. Fake out!

But…this situation, of all these lights striking the camera sensor, has altered the range the camera picks up. So among the phenomena recorded is a happy face orb (center of the tree)…and a ghostly specter of an 1880s gentleman in mustache (lower middle right). These are authentic. I didn’t see these until I processed the photograph on the computer. A good computer program like Photoshop and a photo raw file are also beneficial for this type of work. It was also fortunate that I was photographing against the dark side of the tree, which served as an excellent backdrop.

So…the park was established in the late 1800s when large hair and mustaches were popular with men (the specter here looks a lot like Mark Twain to me). The question is – who or what is this image of? Is it of some person of that era who, after they died, chose to stay around the mounds? Or is this a tree or dormant mound spirit who assumed the appearance of one of the modern people who recognized and respected the mound?