This story I have pondered long about sharing but decided it was time to tell others what this lioness told me. It’s important nowadays when there is a growing awareness about the need to honor and respect all life.

This is a sad story in many ways, but inspiring in the intense loyalty and devotion this lioness had for her partner. Since this is the week of stories about lions – here’s one about two real ones. 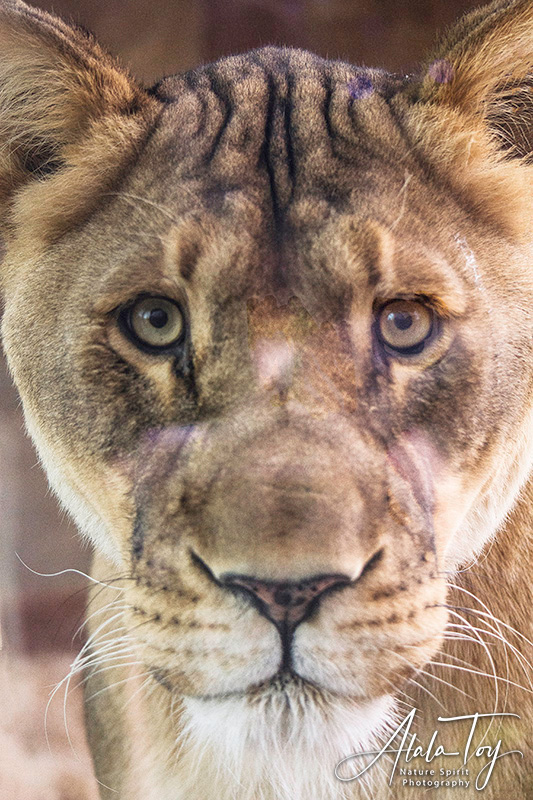 I am an interdimensional communicator. It’s a skill set I have learned to keep turned off most of the time, to cut the chatter coming in from a very full universe. I will communicate with other dimensions if the situation calls for it, or some life form becomes aware I can understand them, and they have a message to transmit or share. I prefer communicating with the fae folk but animal communication also falls in my skill set. This is a conversation I had with a lioness.

One cold winter morning I was visiting the Brookfield Zoo as my photo club was there on an outing. I wandered up to the lion exhibit, which is behind fences and, in one area, a tall plastic window. There were a lot of shouting pushing having fun young school children.

I waited them out and finally got up close to the window, setting myself up to take some photos. I was scanning the enclosure and admiring the male lion – Zenda – who was standing regally on a stone cliff, deep inside the enclosure. (See below)

The female – Isis – had been close to the fence but had moved away. I wanted to photograph her and so called to her inwardly (thinking it was only in my imagination) to please come close.

To my surprise, Isis seemed to hear my thoughts and came right up to the window, stopped, and looked me in the eyes. She did not move. She clearly wanted to capture my attention and communicate something to me. Frankly, it was cold and I wasn’t in the mood to talk so I tried to ignore her overture but she was steadily persistent in her mission and so I readjusted, and listened.

You can see her steady, intelligent, intense, focused energy in this photo I took of her, above right.

My Conversation with a Lioness 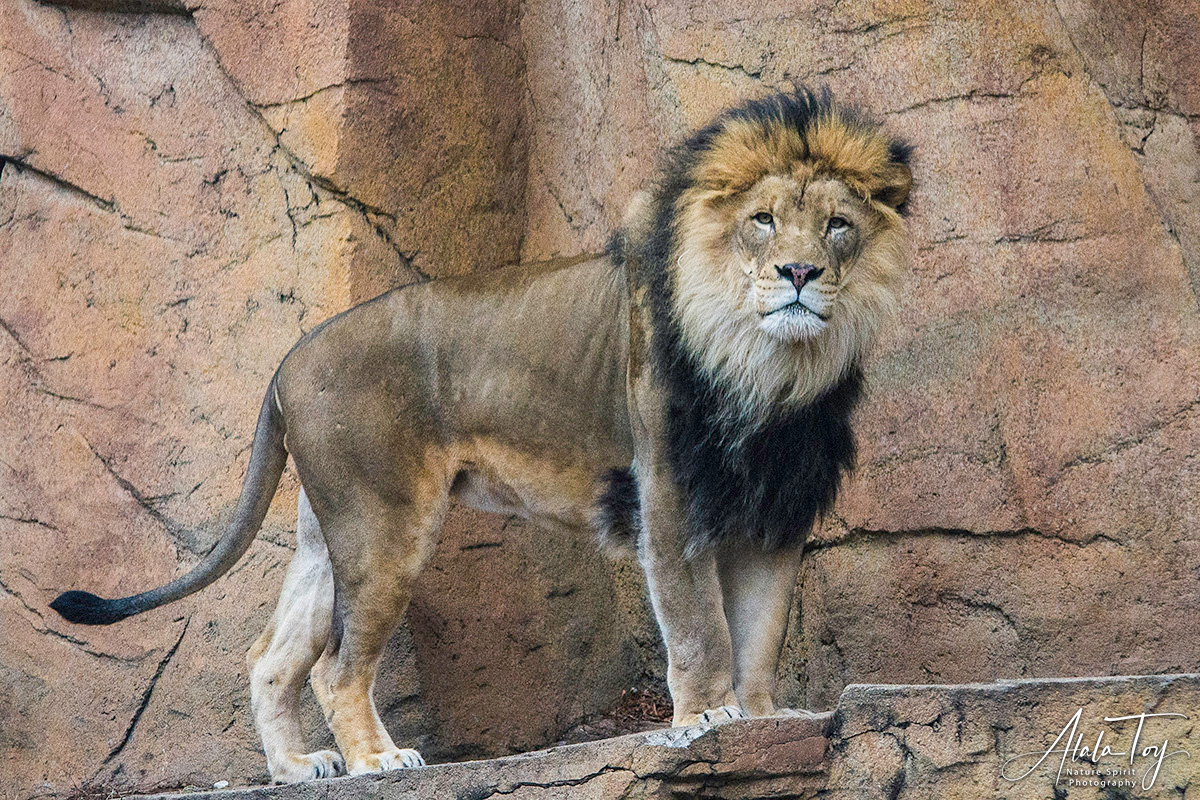 I listened. Translating her conversation into human words, here is what she communicated.

She wanted me to understand and to share with others that she and Zenda were intelligent, aware beings. It was not right for us to keep them caged like this. They wanted their freedom just like I wanted mine. Look at how they were being treated – the shouting, gawking crowds staring at them as things. Constant garble of sounds all day long.

She wanted me to understand that they were so unhappy and if it were not for each other, the situation would be unbearable.

I was confused by all this information. It was a download of facts I had not previously considered about zoos. And there are certainly cases where the animals are happy and sheltered. But not here.

Her situation was so sad but there was nothing I could do, and I told her this. She understood, with great sadness. But she kept her consciousness linked to mine and would not let go. She wanted me to understand – not just listen, but to deeply understand. She was staying linked to drive  her message deep into my energy field.

Isis told me that the only thing that kept her going was knowing what a loss it would be to her partner if she died. She stayed alive to bring him comfort. But, she told me emphatically, if he ever died – she would follow soon after.

It was some five minutes later that I broke off the connection, offered her my love, and left. I didn’t know what else to do.

But after that conversation, I looked at zoos differently than before. I also now noticed others of the animals who were enormously unhappy, especially the Great Apes who are surrounded on all sides by humans and their unending chatter. I haven’t wanted to visit the zoo since then although I sometimes wondered how the lion and lioness were doing, as they were considered stars at the zoo.

Last year I read in the papers that on January 2, 2020 the male lion, Zenda, had been put down as he had a degenerative spine issue and could no longer stand. The article said the couple had been together since they both arrived in 2008, were each around 14 years old and had spent a good deal of their time grooming each other. I thought of Isis and her love and concern for Zenda.

I also remembered what the lioness had told me. I knew that in a long relationship the partner left behind has a hard time adjusting and often they die soon after. I was fully expecting the lioness to somehow leave as well.

Two weeks later, I read that the lioness had mysteriously fallen from the top of the lion exhibit and had been found unresponsive at the bottom of the moat. She never regained consciousness and two days later she was put down as well.

That fall was not “mysterious” to me. I knew that was an intentional act by a deeply grieving, highly intelligent being. That fall was a result of this unbearable grief, and her long-held commitment to stay while Zenda lived and to leave when her partner left.

So this is a story that I am sharing to let others know that we are not the only intelligent life form on earth. Besides being kind to each other – we should be kind to all life forms we come in contact with, from animals to plants to rocks. Each life form is intelligent in their own world.