This cliff sculpture commemorates when the Ant People rescued Native Americans not once but twice. This occurred when the earth was destroyed – first by fire and then by ice – and one earth world passed into another. It is told down through the generations, in Native American story, that the Ant People took groups of virtuous humans into their underground homes and protected and taught them until the earth was safe for humans to once again walk in the sun. 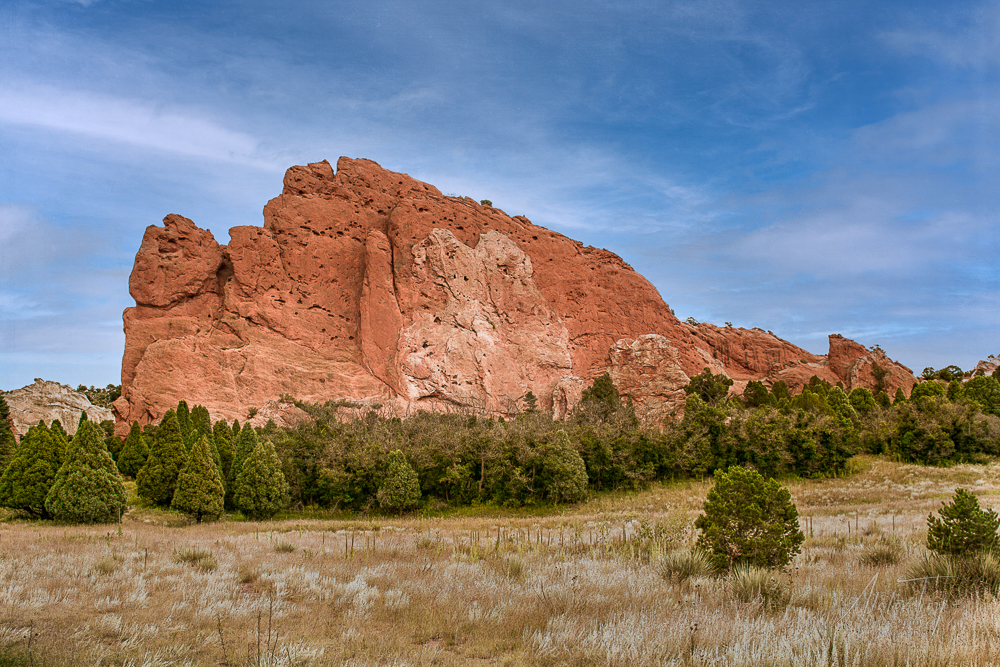 Hopi Legend of the Ant People

This story is commemorated by interdimensional artists, in a hundreds of feet tall ancient bas relief located in the Garden of the Gods, Colorado Springs, Co. The figures in the story are of a lighter whitish stone set into the red stone around them.

I have been photographing the Garden of the Gods on visits west for several decades now. Each visit permits me to go deeper into the life of the rock beings and nature spirits who live there. I have always felt that I was returning home to a place I once dearly loved and lived in.

A few years ago, the nature spirits of this section of park entered into conversation with me. They uncovered my eyes and showed me this mural. This cliff stands in the middle of a great field and thousands of people walk beneath it every day. But very few see with subtle eyes and so most miss this magnificent commemorative monument.

On the right, in the mural, is the profile of an ant being, with their distinctive long face. On the upper left is the image of a Native American. On the lower left is the image of a lion. (The lion image is seen at several locations in the Garden). To the right are two life forms admiring the mural. And the mural itself is inside another life form created by the entire cliff. Over much of the face of the cliff are caves. I am told by spirit that there are cave openings to the inner earth in this area, only they exist in a different dimension and so are difficult to locate.

So this is a story sculpted by beings of other dimensions commemorating the long partnership and friendship of the Ant People and the Indians, who are watching each other’s backs, and both are protecting the all-important animal life of earth.

Local Knowledge of this Monument

I was taking photos of this cliff this year when a local guide stopped to show her group the bas relief. She explained that this area is the ancient homeland of the Ute people and still, once a year, they return for celebrations. At that time, they come to honor the Indian visage carved into the cliffs. The guide and I exchanged information – I showed her the Ant Person and she showed me the special feature of the teardrop falling from the Indian’s eye.  She explained that when it rains, a rivulet of water runs down from the eye into a cliff indent, darkening the stone and remaining long after the rain has gone. The Indian is shedding a tear for his people! It seems appropriate for the teardrop to stay a long time, in remembrance of the loss of the different earths and its lifeforms at the turn of an age – the entering of a new world. Here the storm clouds are gathering once again, casting their dramatic beauty over the ancient cliffs.

Below is a diagram of the figures in this mural. 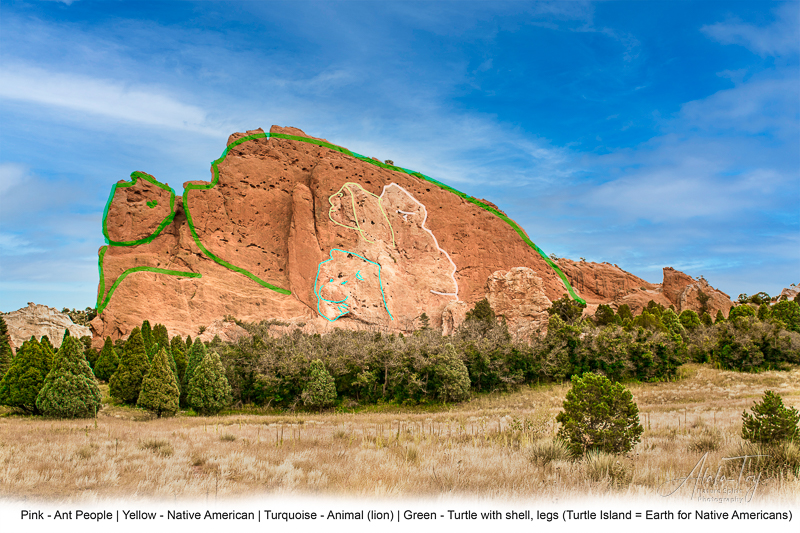 Links to Sumeria and Ancient Egypt

As an aside for those interested in the long-term alternate archeological knowledge of the earth: Gary A. David, author of Star Shrines and Earthworks of the Desert Southwest, has found parallels between the stories of the ant people and the ancient cultures of Babylon and Egypt. In an article posted on the website Ancient Origins, David states “It is interesting to note that the Babylonian sky god was named Anu. The Hopi word for ‘ant’ is also anu, and the Hopi root word naki means ‘friends.’ Thus, the Hopi Anu-naki, or ‘ant friends,’ may have been the same as the Sumerian Annunaki—the beings who once came to Earth from the heavens.”

Some Ways to Connect with Us

If you would cherish having this Limited Edition photograph in your home, CLICK HERE.  If you would like to see more nature spirit images, head over to  atalatoy.com