How Does a Change in Energy Affect the Whole?

Laura asked me “From your perspective, what is the impact of the loss of these trees” – referring to these Cottonwood trees with the images of a nature spirit and a pioneer, which I wrote about a few days ago. 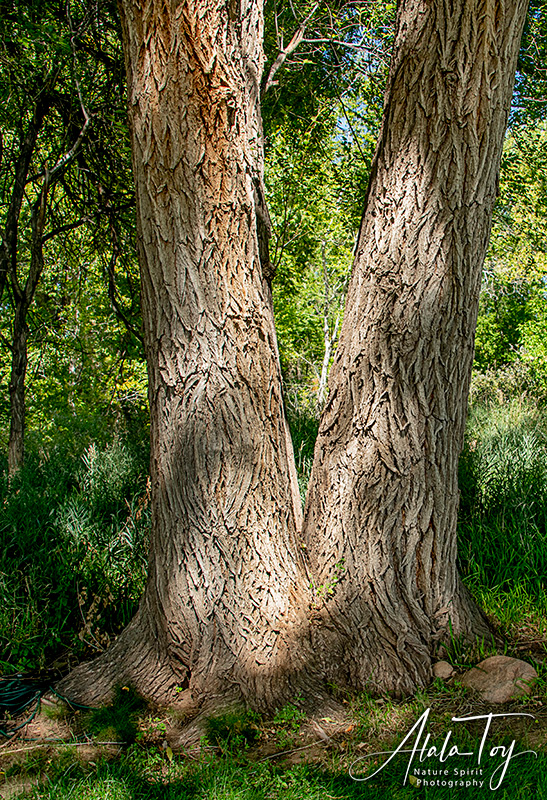 Spirits in a cottonwood tree

The answer is – it depends. It would take a book to answer. But to summarize some of the major changes:

These specific trees are placeholders. They are holding one of the main nodal points of a energy grid that covers the entire original Chatfield Farm, in Colorado. They are holding in place the respectful partnership of nature and man. Like any grid – if one or two anchor points are removed, the grid can continue on and if the nature spirits wish, they can transfer the anchor to another tree in the area. If many anchor points are removed (cut down or lost to storms), then the grid would weaken and dissolve. Perhaps a different type of a grid would take shape, with a different energy. We see this when housing replaces woods – the energies change.

The energies shown here are not the tree itself – they are what we humans would call disciplinary energies – e.g. they shown the function of the tree. Thus these energies can be transferred. There is also the inherent life form of the tree, and the life form of the nature spirit birthed with the tree and who stays with the tree until its death. If the tree dies, these energies “die” as well. Then there are levels of nature spirits going up the line – the spirit responsible for a small area, the entire region, etc. They are responsible for the well-being of the life forms in their area, but they live even if a specific plant or tree dies.

So I have a few true stories about variations on this situation. Of course. I love stories!

There was the time I used to live near Crabtree Preserve in Barrington, Illinois and I would take frequent walks along its paths. I especially liked one beautiful tree that lived next to a stream. One spring, following the usual flood time, I found the tree had washed out and fallen down. “Help” I heard. “Help me” I heard repeated over and over. Something felt off about this request from the nature spirit world and I had been taught to wait before acting when in contact with beings from other realms. So I continued on the one mile loop, to think about it for my next time around. 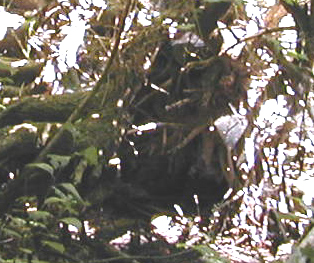 However, as I approached on my next round, a deva spoke to me. “Don’t help him,” she said. She told me he was the nature spirit in charge of that tree and area, and it was his fault the very healthy tree had washed away. He was being punished – in jail in the roots of the tree.

I took a photo of the tree roots – you can just make out the nature spirit form. (So this was at the start of my photographic documenting, when I was not yet good with my camera and did not even save the large file, so the image is blurry. See, I deeply relate to posters on our community pages about their blurry photos…)

To the right shows the same area, and him four years later – see his now crossed legs, arms outstretched and hairy head merged into the roots. The once lovely flowing stream was now clogged with accumulated brush around the body of the dead tree! 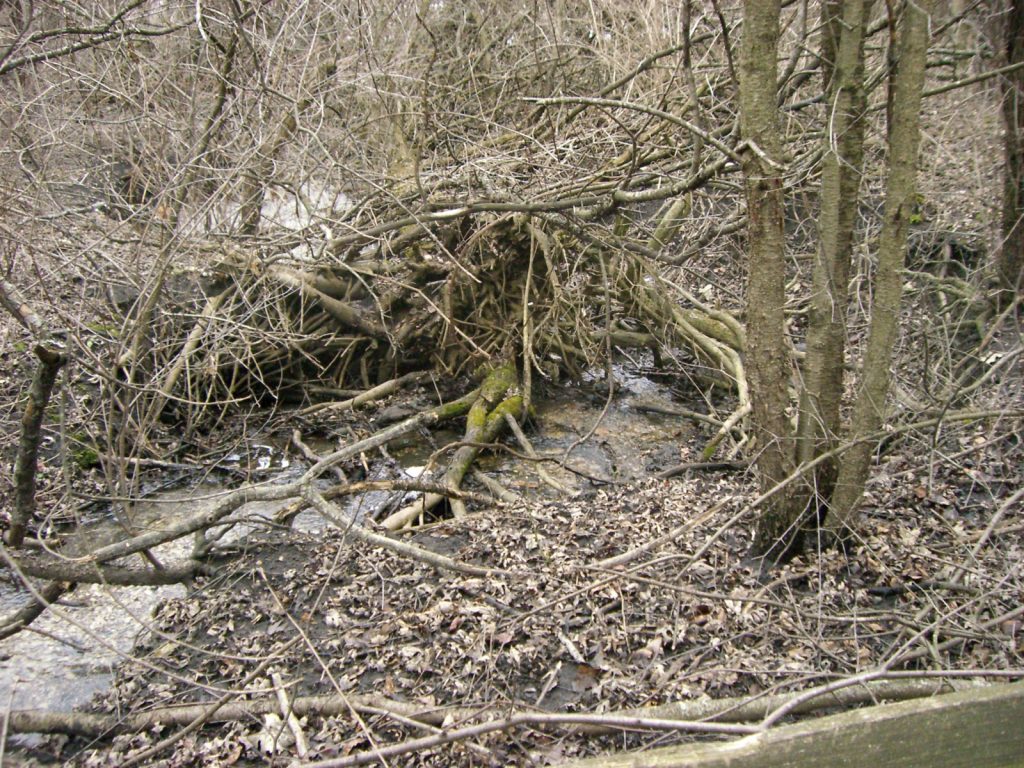 The fairy was imprisoned there for about seven years – the nature spirits do not mess around about dereliction of duty! – and then he was released.

Gone to a New Life

There was a very beautiful tree that I loved to visit with on my walks in the woods. We would commune with each other. I have since learned that very often, as a mature tree nears the end of its time on earth, it consciously reaches out to humans, seeking to connect and share its wisdom. Again, one spring, the tree had blown over and was dead. I was so shocked and sad. But the deva of the area spoke to me. “Don’t be sad,” she said. “That tree had been here several hundred years. It was time for it to transition on to a new experience.”

When Change Occurs on a Large Scale

Whether it is a major weather event or a builder leveling a forest to create a subdivision – large scale destruction of an area is a disaster on many levels. There is the smell, feel and psychic sense of death on many levels. I always recommend that when you know a natural site is scheduled for destruction – you visit the site, sit with it and tell the deva what is to occur. They will hear you, if you are sincere and focused. They can then make arrangements in their world – moving those who can move and helping those locked to the trees and plants to prepare for crossing over to spirit. 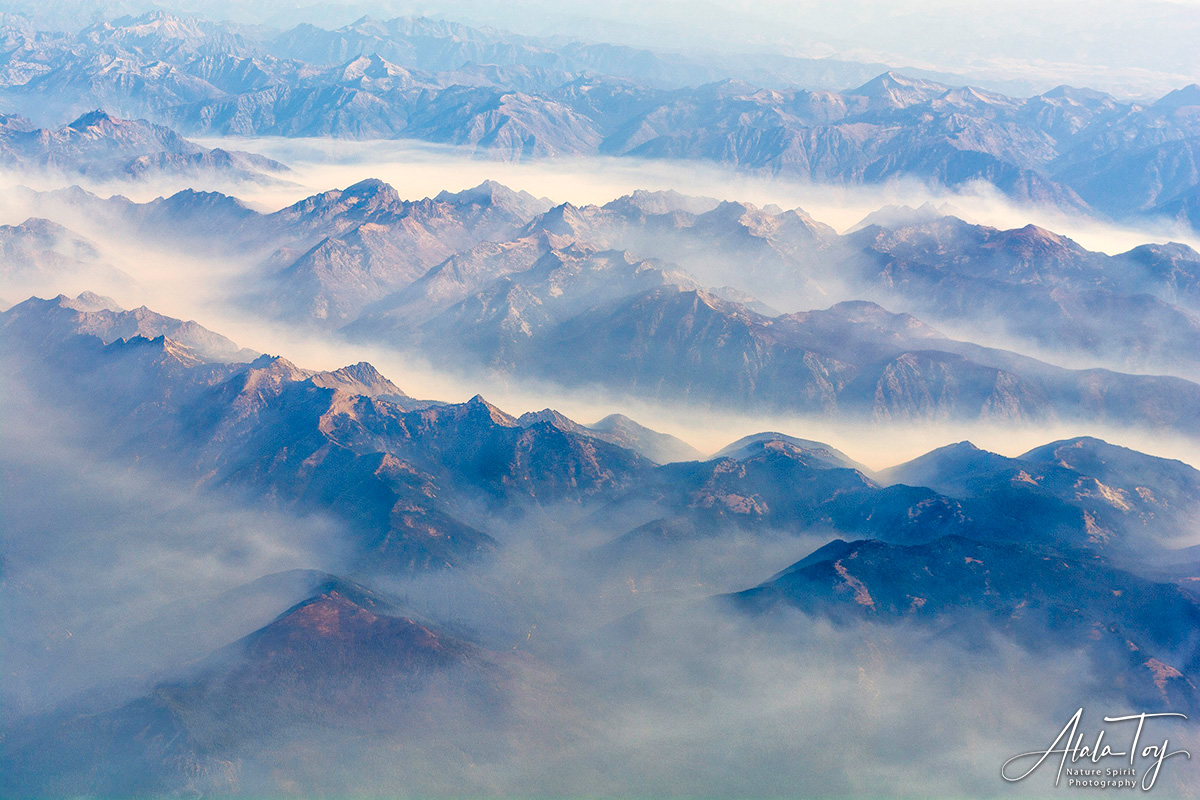 When an area is decimated, there is harm to many levels of the earth grid. If the area is large, many levels of grids that compose the energy of that particular area dissipate. Their placeholders (like the Cottonwood trees above) are gone. The parts of the grid that are larger than the area are weakened, in part or total, until the grid energies can reconnect. Deeper grids – those anchored deep in the earth – will still operate. Nature spirits who are mobile can flee and I have many times found them huddled in refugee camps at the perimeters of housing developments. In a number of these cases, I have worked with residents to help relocate them into the new vegetation that gradually starts to be added in. This works well for everyone.

We Can Affect Change 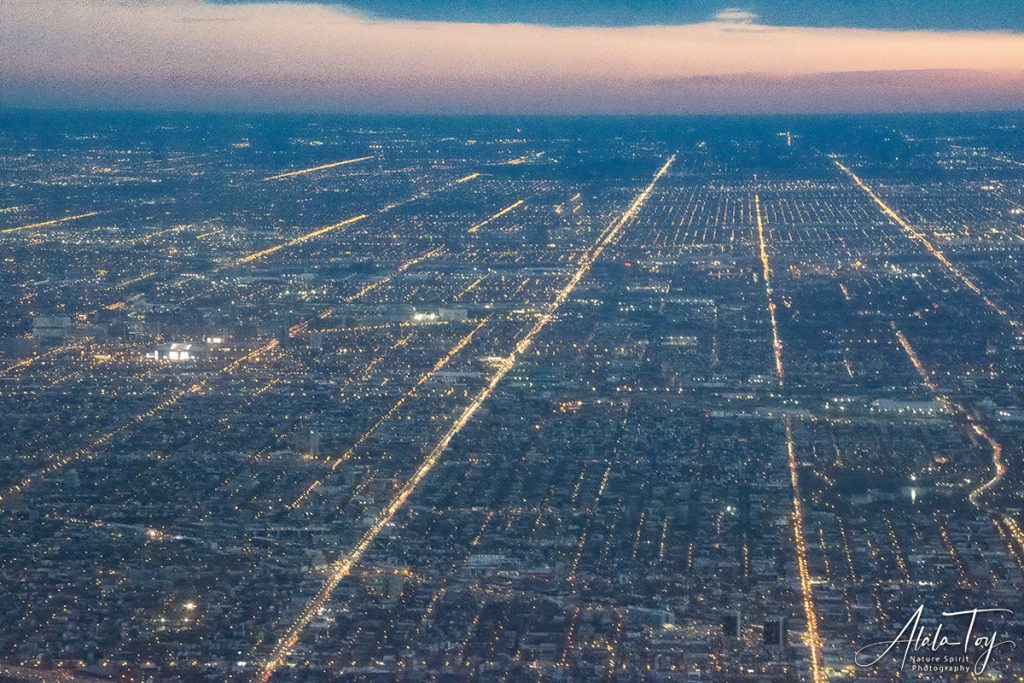 In the two from-the-air images shown here, feel the difference in energy between the mountains, where the nature spirits prevail; and the night view of Chicago, where human consciousness prevails over nature.

The sheer size of the human city has created a new grid. It is one in which the frequency has been determined by the many humans feeding their consciousness into the atmosphere.

There is an adage among energy workers that a shift of consciousness among only 10% of a population can shift the energy of the whole. You can imagine how that shift would affect this city grid.

Something to think about, in this time of radical change, when the intent of so many is shifting the consciousness of us all.