Marker Trees | Guides in the Wilderness

Since ancient times, native peoples in forested areas have shaped trees to mark paths and special locations and to direct travelers. In the USA these are called Marker Trees and were first shaped by Native Americans and later by farmers and settlers. These marker trees take on their own personalities, over time. Note the images in each of these marker trees. 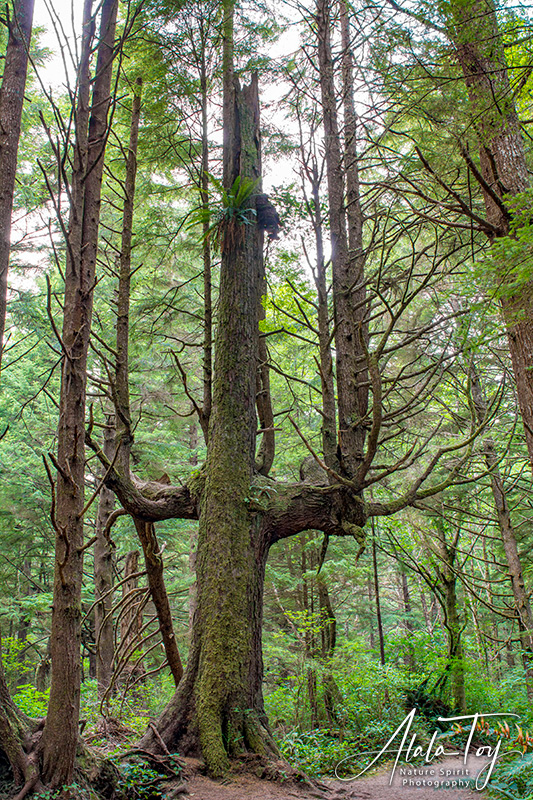 This marker tree to the right and left below is near the shore in the Pacific Northwest. It has all the classic details of a marker tree but is a bit unusual in that there are two parallel directional arms instead of one. There is a tall straight trunk, branches bent at a 90 degree angle and at their far end bent upwards again at a 90 degree angle.

This tree is hundreds of years old and in the interim has grown secondary branches but the core design is still there. It would have been used to mark a line of travel to a significant place such as a good fishing or collecting area. 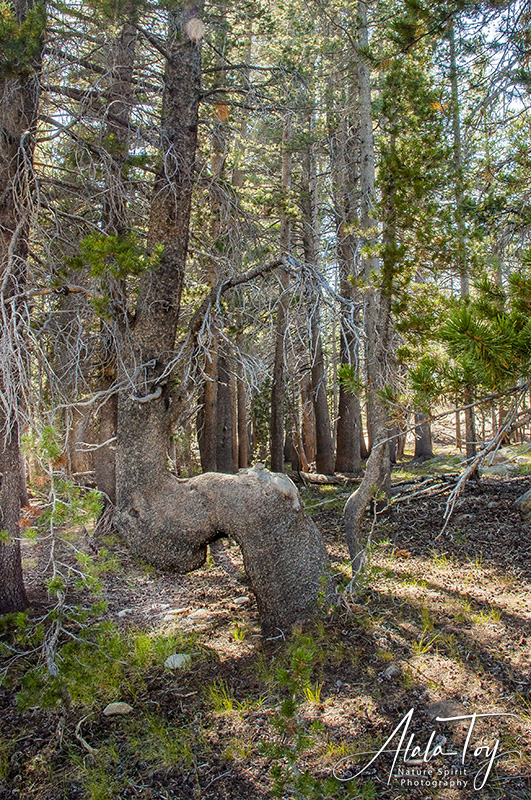 The marker tree to the right is in Yosemite National Park, near a river. It has the classical horizontal bend at a height close to the earth and then a perpendicular upward turn. It may have marked an especially good fishing area.

The tree below left is at the Denver Botanic Gardens’ historically preserved Chatfield Farms, Littleton, Co. Its marker arm rests low to the ground and at one time would have defined a land ownership change.

I especially like this one for the ornate Victorian tree spirit image up high on the trunk.

The trio of photos below are from a rural area of Illinois. The marker tree to the right has a less precise form, which makes me feel it was most likely fashioned by white settlers, marking a dividing line between land grants.

Near that marker is one of my favorite markers, this one crafted by the nature spirits. On one walk through the area, I was in an especially peaceful meditative mood.

That seemed to resonate with the nature spirits and they called on me to trek through some especially thick brambles. I was hesitant, but they gently insisted I would appreciate it. So I went. I suddenly came upon a small clearing in the middle of the woods. There was an especially long branch reaching out into the area which they requested I duck under. When I did, I entered a decidedly sacred area of hushed sound.

This area could not be seen from the path or even near to it and on future walks, unless I was in a meditative mood, I could not find it. Very strange!

In the middle was a largish stone. On inspection, I saw it held what the spirits told me was the image and energy of frog. 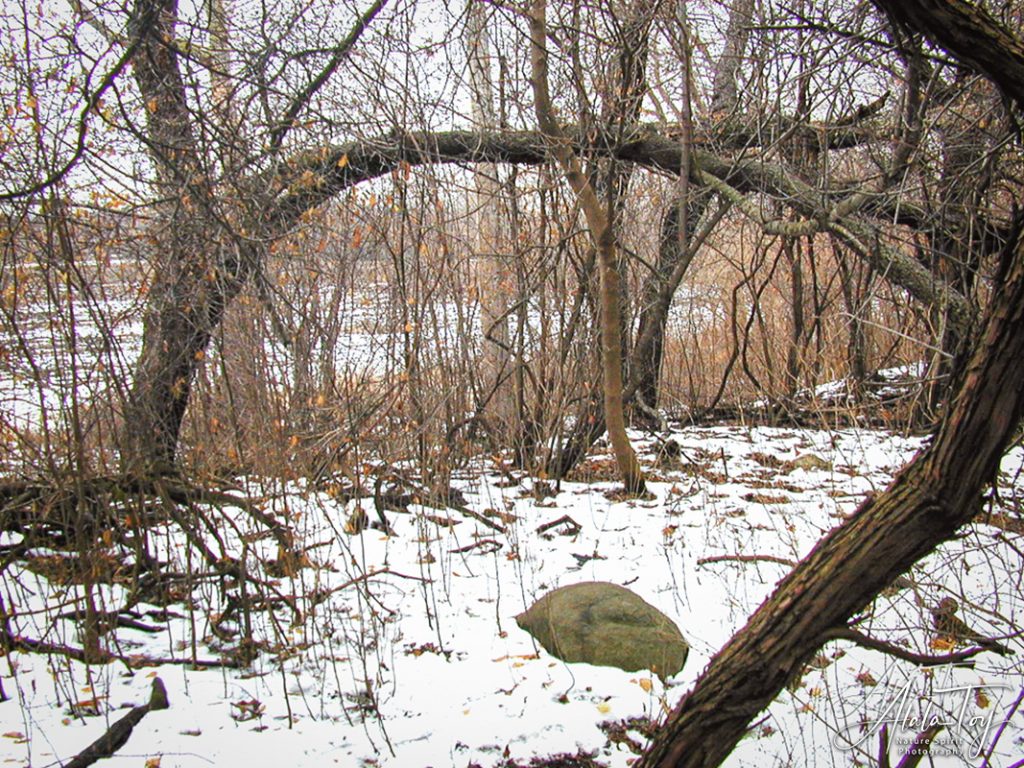 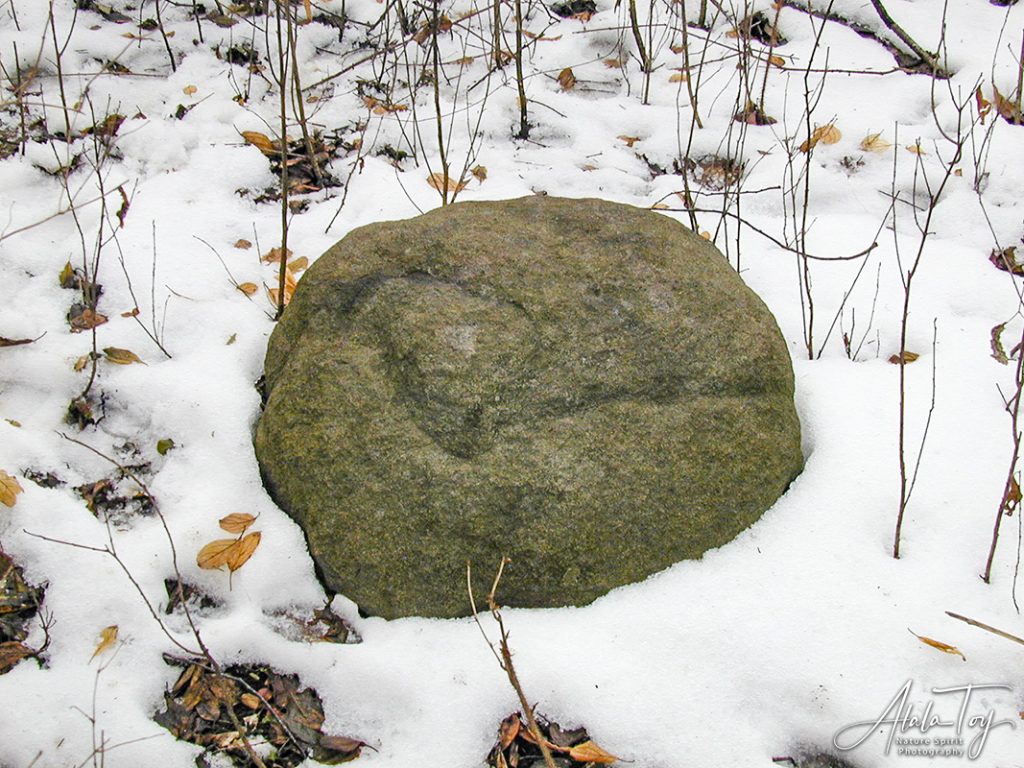 This was a central nature spirit shrine area for the frog energy that is manifest throughout that property and whose image is seen often in its trees. Much of the property is swampy and frogs abound.

Very often a property will honor the energy of a specific animal, or energy, and that image will be manifested in the trees and rocks, as here.

This blog discusses marker trees. There are many other ways nature and nature spirit shapes trees. Sometimes they will bend over a tree as a portal marker. You can look through the middle of the bent area and the light will be different. You need to be careful before deciding to resonate with the frequency of such a portal and then go through it.

Sometimes the energy of the land itself will be so strong that the tree has no choice but to conform to its directional power. If a tree grows in a vortex, its trunk will have a decided spin to it. If a tree grows in a strong magnetic field, it may not be able to do anything more than grow along the ground.

Over time, I’ll discuss various of these situations.