This tree with the image of an Elfin Warrior Prince and his entourage is what I call a marker tree. It defines this geographic area as being under the protection of this powerful Elfin Warrior Prince. He has posted his image here as his grounding point or home. He roams throughout his territory, is aware of whatever needs his attention, and is there instantaneously. This location is like the central rod of an umbrella – it is the focal point and the umbrella extends out from it.

(In case anyone considers it: Should anything happen to that tree, the Warrior Prince would simply shift to another tree as his headquarters – he is free and mobile of the tree unlike the tree spirit itself, which is tied to the condition of the tree and dies when the tree dies.)

This marker tree is located in a small grove through which people must pass to reach a popular and immaculately clean river swimming and picnic area that is just beyond. The Elfin Prince and his community keep the energy of this area clean, positive and elevating and that consciousness manifests in the care humans take of this location.

This is a highly nuanced and sophisticated marker image that clearly defines the many facets of a powerful nature spirit’s domain. 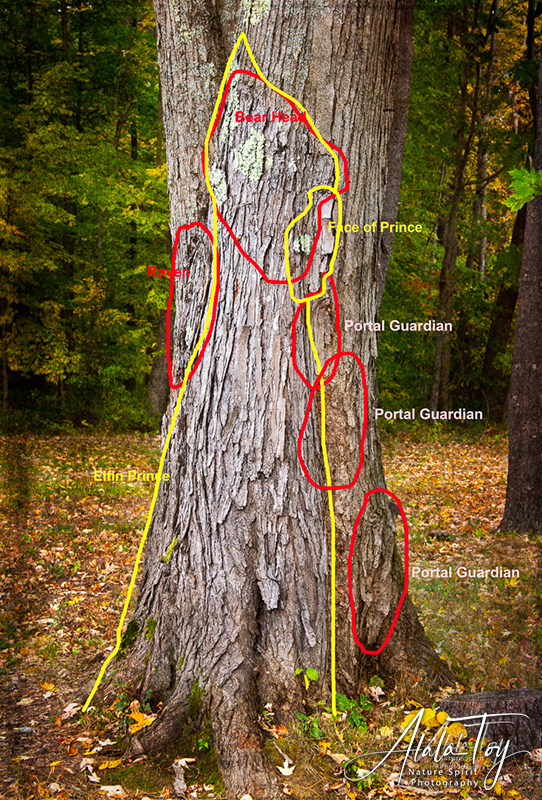 Time moves differently in the elfin world and this image depicts the Prince as both a young man and a mature warrior. Looked at one way, it shows the Prince as a fine-featured young man in a beautiful feathered, hooded cloak. Another way it shows him as a weathered warrior in a cloak with a pointed hat. The Prince is shown emerging from his home in the inner earth, about 2/3s of him above ground.

Looked at yet another way this is a group portrait. There are multiple overlapping images – the Prince, the guardians of his inner realm portal, his familiar and his messenger.

The Prince can be seen wearing a bear head hood – this shows the energy of his familiar, the specific nature spirit that is protecting him. The bear is happy, indicating the general benign nature of the Prince.

Guardians of the Portal

This tree is also a portal into the Prince’s other dimensional realm. The portal / gateway / door area can be seen in the long “opening” in the bark that starts under his chin. (This is an area of the tree called by some human naturalists and dowsers a door and it is where they might feed the energy of the tree with nutrients if needed).

There are at least three portal guardians here, under the direct supervision of the prince – I’ve circled them in the diagram. It is unusual to have so many guardians, and the presence of so many indicates how significant this entry point is. Each being protects specific frequencies from gaining entry (e.g. different human or animal or other dimensional life forms who resonate at different frequencies). The guardians are also there to ensure that none of the many beings who pass by inadvertently enter the portal. No one gets by a portal guardian unless they themselves stand aside to permit entry!

On the Prince’s back is a raven, positioned at the occipital lobe where messages from spirit are received. Its presence indicates the Prince is a powerful, wise leader who has many servants who report to him of the goings on of his domain. (This is similar to the Norse God Odin who has two ravens he sends out each day and who report back to him of the goings on of humans).

The tree is located in North Conway, New Hampshire.