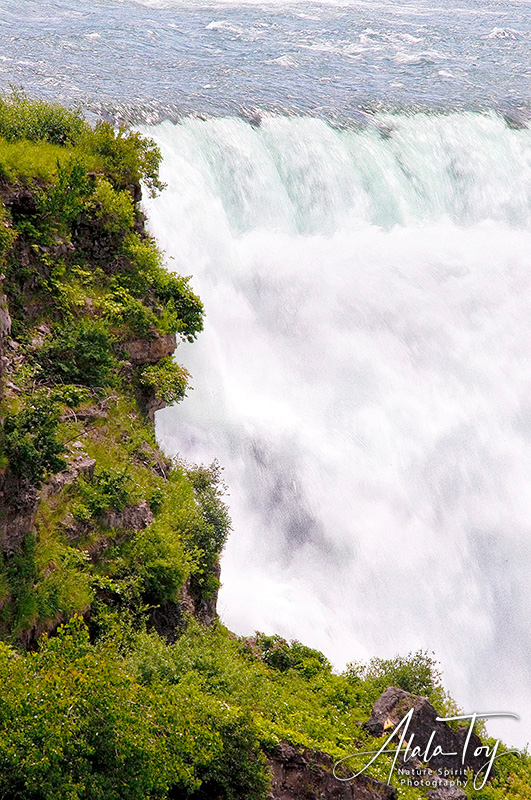 The Birdman is sacred to the Native Americans of many nations. He represents the Upperworld, order and light. Like many Upperworld beings, the Birdman is also a feared warrior who defends right order.

The Birdman is a living consciousness whose energy and presence can be invoked. I’ve been honored to photograph his energy on a number of occasions. Sometimes, as here, I have served as an instrument to reveal his presence, even against my will.

Here is the story of this Birdman, who energetically commands the area from the top of Niagara Falls.

I was on a photographic holiday that included Niagara Falls in New York State. I had just climbed down into an area near the Maid of the Mist boat ride and walk. The cold was biting through my light jacket, spray from the falls was beginning to soak through, and I was concerned about my camera, which was now carefully zipped inside my jacket. I was considering leaving for someplace warm and dry but the local nature deva was urging me to stay and look around – really look.

The tussling between the wishes of the nature deva and myself became psychically intense. The deva wanted the camera out and me photographing, I wanted to just leave the spot for someplace dryer and warmer. The wind spirits were their usual mischievous selves: they enjoy teasing me when some really good shot is at hand. They were having great fun starting and stopping their spray play.

The nature deva of that site was getting a bit annoyed and frustrated that I was not understanding the message. She literally would not let me move from the spot, finally strongly communicating to me to look up, there was something important to see, and helping me shift frequency to see the form. I was overwhelmed to see Birdman had manifested so strongly at this site!

The deva wanted the Birdman photographed, insisting I assist. Devas can be very insistent when they need something accomplished, and on various occasions I have been glued to a spot until I stop fighting the request and listen to their need.

As that is part of my contract with the nature spirits – to take their photographs for humans to learn to see them – I have gotten used to being “nagged” until I learn to shift my dimensional perspective to match theirs!

What do the falls look like without human presence? Thanks to Photoshop, I digitally removed the presence of humans…what a magnificent sight! You can see Birdman at the edge of the falls, upper left. 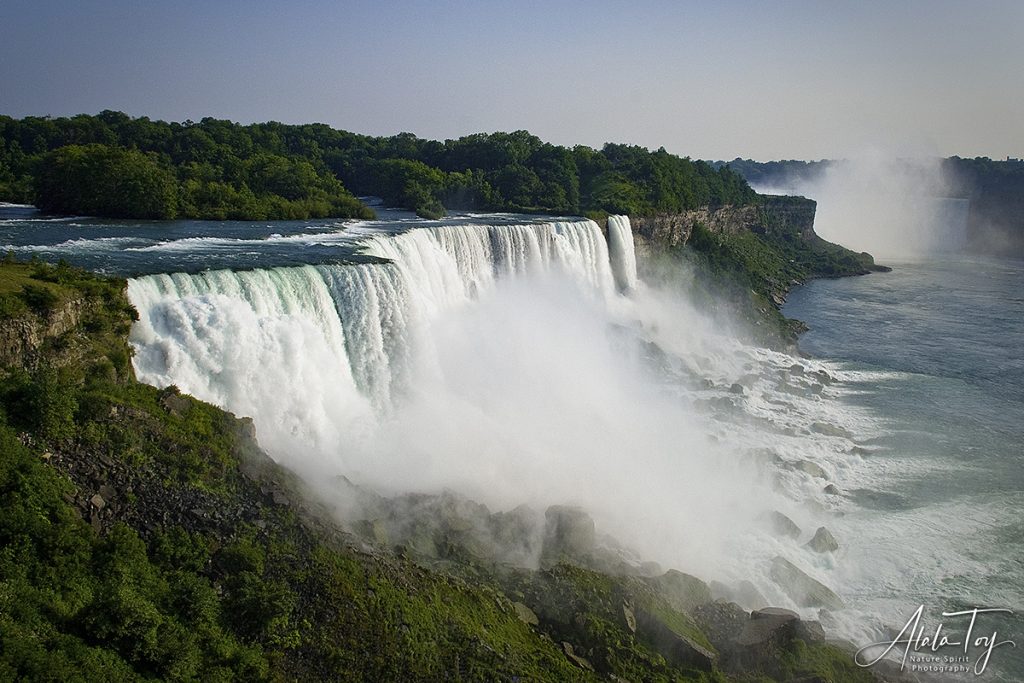 Finally the spirits and I came to a compromise. It was agreed I would visually line up the shot, duck behind a large boulder, and in the rare moments when the wind paused for breath, pull out my camera, dart out and get the shot. The result is the portrait study at the top of the blog.

Now – why was the deva so insistent? I am told it is because it is important for humans to understand the power behind natural sites sometimes comes from the power of the spirit associated with the place. In this case, Birdman is a powerful force, a powerful enough warrior to command both the water spirits and will of humanity to respect the area.

As you can see, the Birdman’s energy is real and can manifest well in our third dimension, if we choose to look. The presence of Birdman at the powerful and once-sacred Niagara Falls is yet another example of the reality of life forms of other dimensions who can be seen by some, who can manifest on earth when they wish to, and with whom we humans could work for the betterment of all.

Tales from the Americas: There are tales among some Indian nations of real birdmen wandering the Americas. There are tales of the birdmen as a group carrying something. Alternative historians have suppositioned these could be groups of Templars who had escaped to the West. In their white hooded garbs, they would look like birdmen, especially if they were, as some believe, carrying their most prized possession to safety – the Ark of the Covenant. The Ark is usually depicted as having images of angels or angel wings on top of it, which increases the connection to birdmen if seen by the Indians. I’ve seen drawings of such a supposition, but cannot locate them now. There are alternative historical experts who believe they have located various outposts where the Templars settled, some in Massachusetts and some here in Illinois.

Below left is an image of Birdman crafted by an ancient artisan of the Mississippian Period, courtesy of Wikipedia. Next to it is a contemporary portrayal of Birdman by Native American artist Herb Rowe, courtesy of warpaths2peacepipes.com  Both show the Birdman’s hooked beak/nose as does the Niagara Falls sculpture. (The Niagara Birdman is available as a print, simply click on that image.) 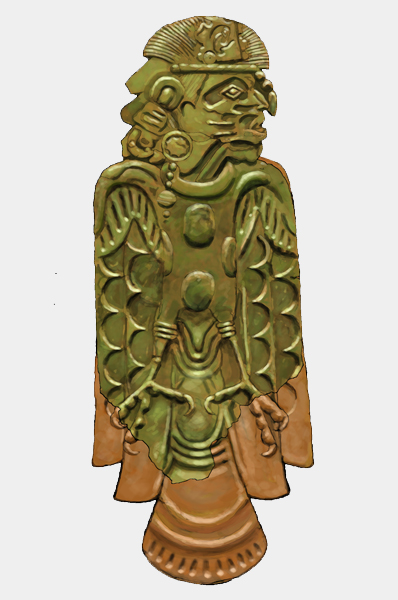 A illustration of a human headed avian Mississippian culture repousse copper plate found Malden, Missoiuri in 1906. Reconstructed areas based on Malden plate F and the Upper Bluff Lake avian plate, as all three are thought to have been made by the same artist or workshop. 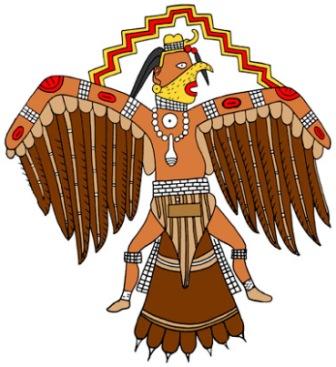 Native American rendition of Birdman by Herb Rowe as seen at warpath2peacepipes.com