Truce Declared Between Humans and the Wood Elves

This is the story of a truce declared in a war between the nature spirits and humans, each of whom claim ownership of a parcel of land in the panhandle area of Florida.

Battle with the Wood Elves

The nature spirits have lived on the land for eons. The humans were headed by a lumber baron who “civilized” the woods, turning part of it into an elegant estate.

The outcome of the war, and the documenting of the truce that was declared, is energetically described in this placeholder tree. It’s a Live Oak who lives on the line between the two zones – at the edge of where lawn meets woods.

The job of a placeholder tree is to keep in place a specific type of energy. This tree is documenting and serving as the placeholder in a several century old spirit battle over the use of this parcel of land. The groomed area is part of a lumber baron’s estate. The forest belongs to the nature spirits, protected by fierce warrior wood elves. 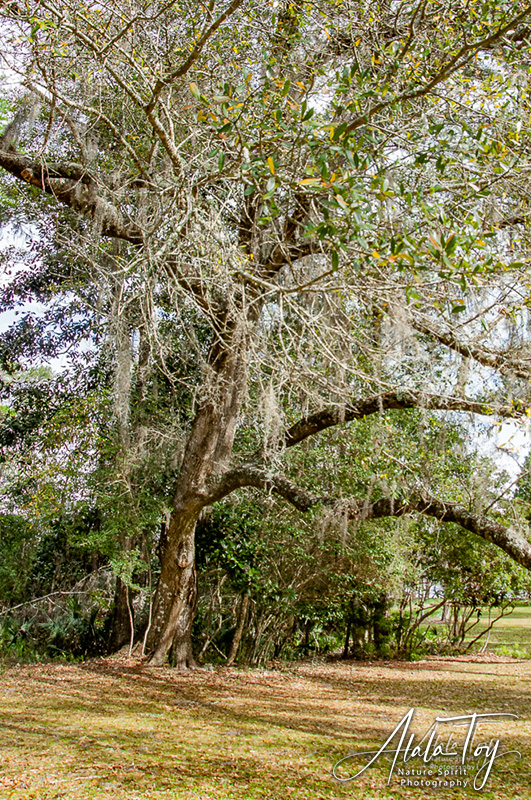 You can see the Baron’s face in the trunk of this tree, which stands right at the demarcation line between woods and lawn.

As you can see in the closeup, an elf warrior has gone eye-to-eye with the lumber baron in this battle. The elves have clearly beaten up the human very well – there is sap blood oozing from the human’s mouth and he has a black eye also oozing goo.

According to the nature spirits who established this truce tree, the elves are much smaller than the humans. The nature spirits have held the encroachment of humans at bay – beaten them up pretty well – and for now there is a tentative truce.

The elf is wearing a typical elf helmet – it is simple, covers the head except for the face and has a nose guard. (Their helmets remind me of ancient Greek helmets.)

The human is wearing a mask (e.g. he is playing a part and is not what he seems), and is jowly and fat – an older man gone to seed. His pursed mouth indicates they consider him parsimonious. (You have to remember the human made his money cutting down trees without even asking permission or thanking the tree spirits. So the relationship between the two species was not friendly, from the elves point of view.)

Today this gorgeous estate is the Eden Gardens State Park, Santa Rosa, Florida – cared for by a very responsible crew of park attendants. They maintain the grounds as they were established long ago, with only a minimum of encroachment permitting the public to use the woods in a non-destructive way. It appears the standoff is secure…at least as long as this placeholder tree lives to hold in place the demarcation line between the two territories.