A Mischievous Young Moss Fairy Asks For My Help

A mischievous young moss fairy asked for my help one sunny summer morning…this is his story.

I was preparing to give a workshop on consciousness at a summer camp conference on the healing arts. It was up in the Maine woods where the setting was rich with the beauties of nature. 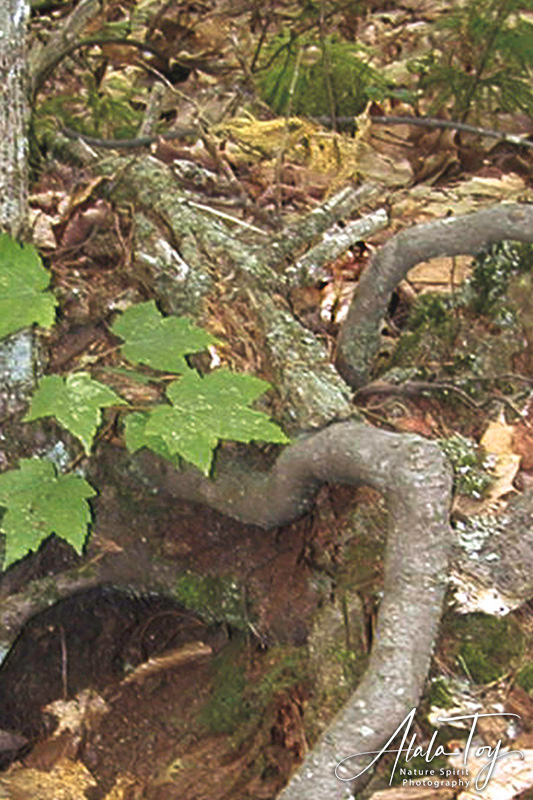 A Moss Faery Close Up – peeking under a root, dressed in pink shirt

Nature spirits were present everywhere in great abundance. They were calling me to explore with them and so I went out for an early morning walk.

Along the woodland walk there was an especially pretty area in which rich green moss covered a medley of tree roots, with many small “houses” tucked in amongst them. These were houses belonging to the moss fairies of this area. I could feel that and reached out to communicate with them.

They and the overlighting deva were very kind to me and showed me their realm.

To the right was a lovely feminine circular field of energy: a glade of ferns ringed by trees. It was impeccably maintained.

To the left was a more elongated, less defined area of moss and trees with a masculine energy. I turned my attention to the fern glen. The ladies and I had a lovely talk about how faeries lived and practiced their craft in their particular glen. They showed me how they always work in a circle, which has a “sweet spot” somewhere in the middle that energizes that domain. There would be a significant change in vibration as the end of their circular domain was reached.

As I started to walk on, my eye was caught by a small male fairy sitting cross-legged, dejectedly pouting with arms crossed and his chin resting in his left hand. He was part way up the hill, sitting on what looked like, from my angle, a tangle of woodland debris. There was a great sense of fun, mischief and frustration about him.

“What’s the matter?” I asked, feeling like I was talking to one of my own sons when they were children.

“Because I need help and no one will listen to me!”

“This place is SO messy!”

I laughed. It felt like I had entered never-never land and was talking to Peter Pan and the boys. “Well, you could try picking it up, like the faeries in the fern glen.” 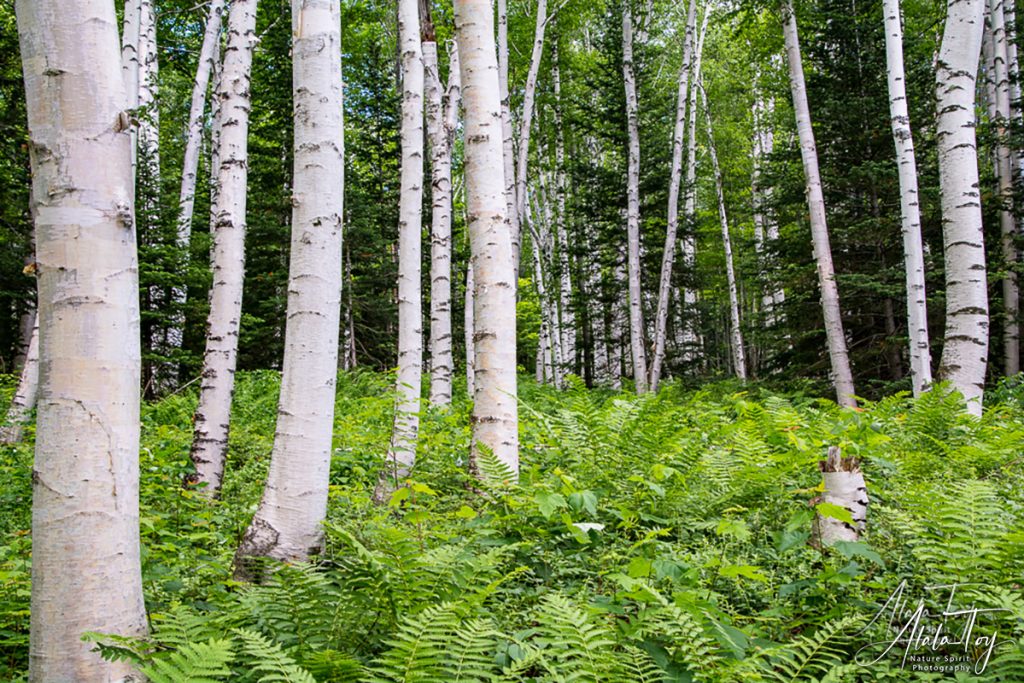 Ferns in a Birch Forest

“No,” he responded. “You don’t understand. I can’t clean it up and the energy has been blocked.” He nodded with his head to the debris on which he was sitting.

At this point, having encountered over my life the consequences of entering a nature circle I have not studied first—there can be many energies trapped in a circle that one would not want to connect to at all—I responded I would think about it.

I continued on my walk, in which I communicated with a number of other types of woodland spirits of that area, including some tall grey bearded wise men that were the nature spirits in the mature pines nearby. 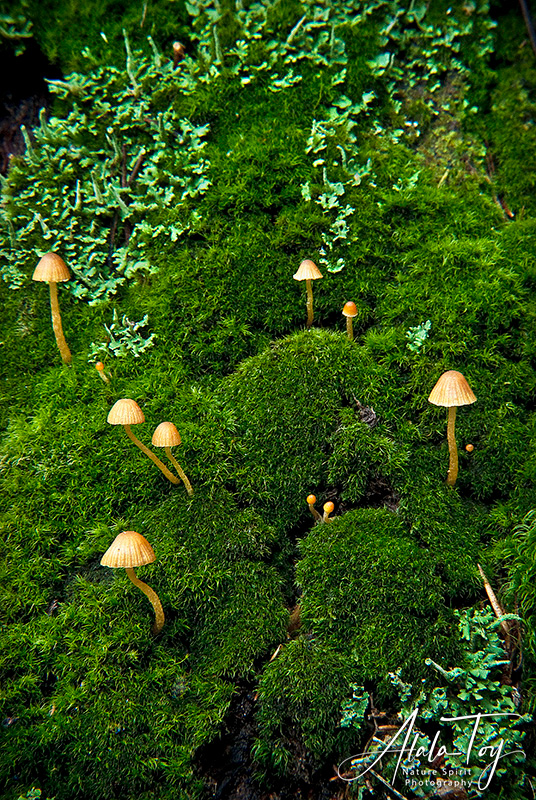 The next morning, having discussed it with my guides overnight (something I have since learned to do on the spot), we decided I would return to the area and see what was occurring.

As I approached the glen area, the moss fairy was waiting. “Just come and see,” he begged, “PLEASE…..”

So I stepped into the area and followed his lead. He took me to the spot where he was sitting the day before. It took a few moments for my eyes to adjust to the situation. And then I saw that beneath the pile of crossed saplings, five in all, which had curiously fallen from all sides to cross over the middle of this spot, was a small raised knoll covered with moss. The area was clean of leaves but the saplings were too large for the moss faeries to move by themselves.

I felt chagrined to have not listened and to have accused the fairy of being messy. He had obviously been trying hard to fix the situation. “You are right,” I said. “How do you want me to help?”

“If you would please just move the trees off this spot, we can do the rest ourselves,” he said.

So I set to work, being very careful not to step on the knoll for that would have crushed some of the lovely moss. In short order, the saplings were removed. I stood and looked at the site. It was a beautiful spot, regal in a fairy manner with its complex pattern of roots raised above the ground, with rich green moss covering that and many holes like windows and doors into its dark rich dirt interior.

“You were right,” I said. “This is truly beautiful.”

Now, woodland spirits with a young boy consciousness like this one often do not thank you, just like little boys who have not been trained by a parent to do so. With this type of nature spirit, thanking works both ways; which is why in some folk tales it is said that if a human is helped by these spirits, not to thank them, for it either obligates you to them or can dissipate whatever favor they have just done for you.

So in this little glen, once the issue had been removed from what was his area’s “sweet spot”, the moss fairy had turned his attention to fixing up his realm. He was fully involved in his task.

I walked on. The next morning I was preparing for my talk on consciousness and took a walk, to sense the consciousness of the day and the group that would attend and what to say. When I came to the forest glen, my breath was taken away.

The area to the left, the boy fairy’s domain, was totally transformed. It was filled with light and so powerful in its energy that it now far outshone the fern glen to the right. I stood and pondered it and the overlighting fairy spirit of that area explained it had been a full moon the night before and all the moss faeries of the area had come together to celebrate with dance and song the restoration of their central spot. Light was emanating forth from the small knoll.

“Certainly,” the response came. So I carefully walked up the hill, avoiding the mossy areas that were living quarters for the faeries and reached the knoll. It was hardly recognizable from the day before. This was now once more a powerful spot, a ruling domain vibrating with earth energy.

I walked up the hill a little way above this, sat down and entered into communication. I was planning my talk and asked the woodland spirits if they had any message for the humans.

“Yes,” the moss faeries responded after a short pause. “Tell them we need them. We cannot do the work without them. Humans are the arms and legs of this earth.”

This story is an excerpt from my book Nature Spirits, Spirit Guides and Ghosts, available on Amazon and Kindle. The elf and the moss fairy home are available as prints in my art gallery.